This cd is a further milestone in the  band’s passion for experimentation. The music of Gipsy Cimbalom Band is a „great meeting” of different musical genres. The ensemble search for those association points, trough which it is possible to interpret what might seem from many other points of view diverse musics. Due to the high level of their technical ability with their instruments their imaginative ideas are effortlessly realised on these selections.
The compositions are not mere reconstructions of pieces from each source area since the music, like Gypsys, crosses bounderias and the band manages to find unexpected combinations and juxtapositions. These traditional tunes merge seamlessly in the hands of the accomplished musicians as they swerve from style to style, constantly improvising around the main theme. This music is no longer ’traditional’ but universal.
Frequently on one piece the music of just one nation is played, as on ’Bitter-sweet Coffee’ (4., combining standard Romanian folk dances „doina” and „sirba”. Likewise ’Csingerálás’ (10.), a characteristic Transylvanian Gypsy dance, and the ’Waterfall Sirba’ (1.), which originates from Moldavia.  However ’Lame Devil’ )6.) is a Dobrudjan asymmetric dance called „geampara” – very similar to the Bulgarian „rachenitsa” – which takes us to the characteristic Gipsy Cimbalom Band atmosphere presented on the rest of the CD. ’Stars, Stars..’ (9.), a popular Hungarian folk song, is given a particular  jazzy arrangement by the Gipsy Cimbalom Band.  ’Lisa, Lisa’ (11.),  is a Serbian Gypsy song sung  with Hungarian Gypsy lyrics. In ’Caravan’ (8.),  a slow Bulgarian „horo” is fused with a Greek „tsigana”, flavoured  with a Duke Ellington standard. ’The Secret Agent’s Lower’ (7.), is a love song given a modern treatmnet, while ’Gypsy Round Dance’ (5.), is a combination of Macedonian and Romanian „breaza” rhythm is „aromatised” with some Eastern spices, while in ’Briul Lui Hacsaturján’ (3.), an Oltanian „briul” merges with Khchaturian’s Sword Dance.
Humor and irony, often self-referential, are evidently theirs, without which their music surely could not be genuine. Besides, virtuosity, a firm grounding in classical music studies, love of jazz and knowledge of and respect for different pepoles’ music are common denominators for the musicians of Gipsy Cimbalom Band. These elements are combined to provide a special musical experience for the listener. It is an honour for us to be a part of this production and and we offer it to you with pleasure and open hearts. 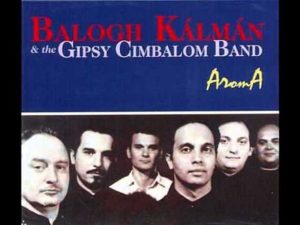