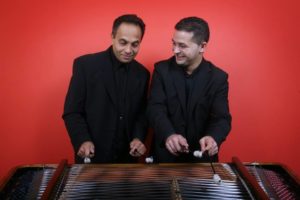 “… it is music for two cimbaloms, arranged and performed by the two leading players in Hungary today. When you hear the incredible virtuosity on display here and know the way the notes are laid out on the instrument, you soon realise it would be impossible to do this on one instrument without collision of stick or getting arms entwined.”

Sotiris Bekas Two of the greatest musicians in the world!!! ????

Simon Broughton,:
…The highlight was a fantastic duo by Balogh and Lukacs improvising on a Transylvanian dance from Kalotaszeg. It started quiet and ghostly, both players plucking with their fingers, before they picked up their sticks and the springy and muscular rhythms of the dance take over. The finale – on Bulgarian melodies – featured three Hungarian concert cimbaloms, santur, kanun plus accompanying viola, bass and drum. The sticks were a blur as each player took a solo and the precision of this punchy, but filigree music come together was breathtaking. A rare event indeed. 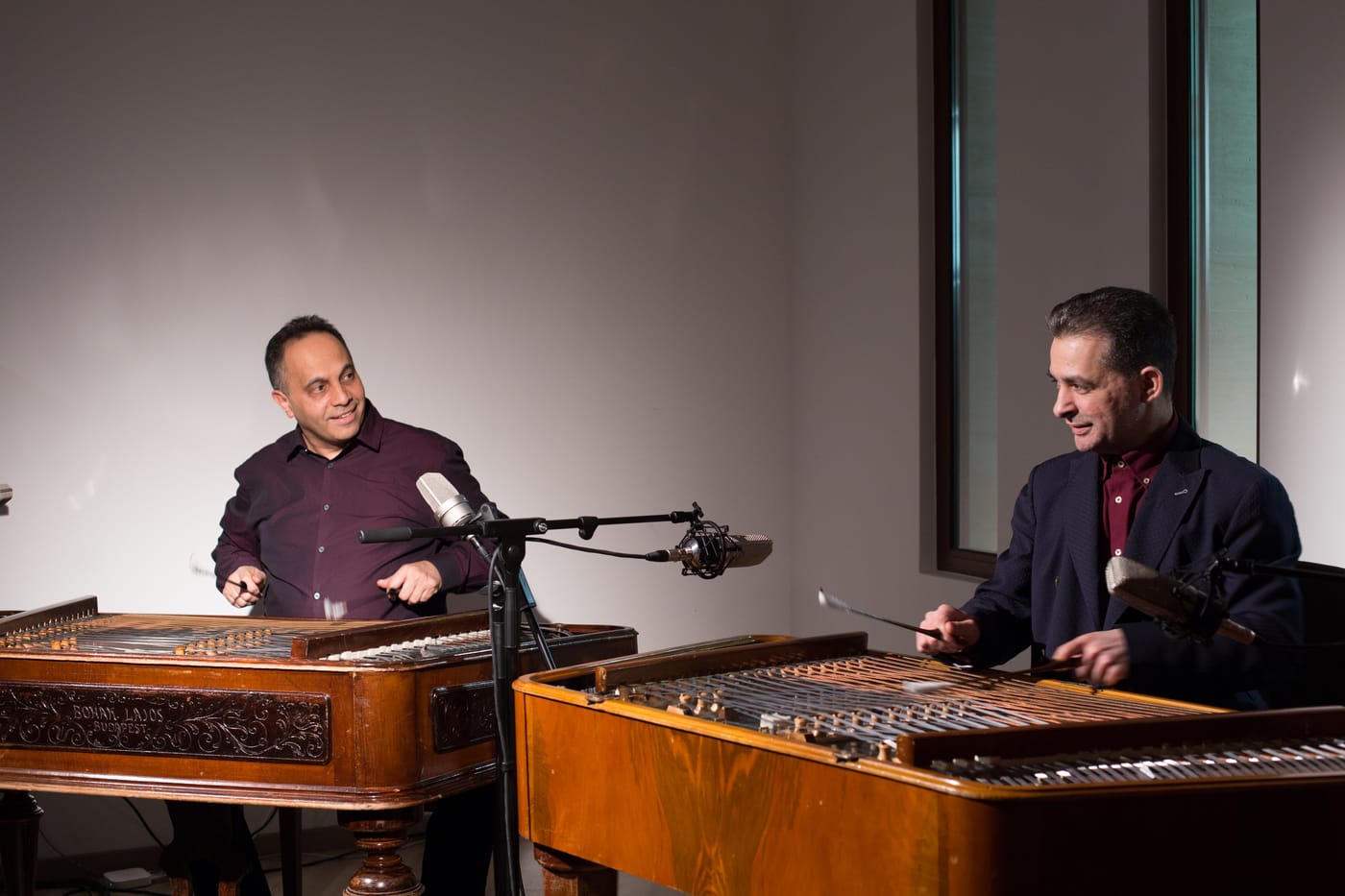 Kálmán and Miklós established  such a rapport was not unexpected , since although they move  in different professional circles, a lot of parallels can be detected  in their careers.

BUY TICKETS EMBASSY OF HUNGARY 2900 SPRING OF FREEDOM, NW CIMBALOM DUO KÁLMÁN SÁNDOR BALOGH (CIMBALOM) MIKLÓS LUKÁCS (CIMBALOM) IN COMMEMORATION OF THE 60TH ANNIVERSITY OF THE HUNGARIAN UPRISING Wednesday, October 26, 2016- 7:30pm Cimbalomduo is a summit meeting of two master cimbalom players who, over the past few decades in their separate careers, have done more to raise the global profile of this emblematic Hungarian instrument than anyone else. Kálmán Sándor Balogh has enjoyed a multi-faceted career, collaborating with many well-known Hungarian bands, touring the world as leader of his own ensemble and as a soloist. Miklós Lukács has made a reputation as a virtuoso in the worlds of contemporary classical music, performing with leading European orchestras, as well as in the jazz sphere, collaborating with luminaries such as Archie Shepp and Charles Lloyd. He is also an award-winning composer and leader of his own quintet. Together they take their cross-genre experiences and shared knowledge of Hungarian traditional music to a new level of virtuosity. Buffet reception- $95/Ample parking on street

2015 is a new milestone in the life of the Duo. Their recently released album does not spare surprises. Jazz meets folk under the flag of musical proficiency. The play of the duo moves on a vast scale from pianissimo to fortissimo, loose tacts to strict dance rhythms, rigorously defined themes to free improvisations, always full of passion and spirit. 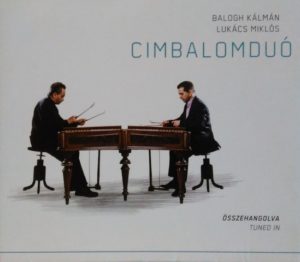 An unexpected meeting of two emblematic instruments: Egyptian oud and Hungarian cimbalom, born under the star of WOMEX15. Tarek Abdallah, master of the classical period of oud, was inspired by Kálmán Balogh and Miklós Lukács’s prolific performance last autumn, and suggested a joint adventure. Abdallah follows the tradition of the thirties where improvisation is a strong element, Balogh and Lukács also cross boundaries and genres, with musical virtuosity, and a distinctly Hungarian sound. Budapest Ritmo gives an ideal setting for the experiment where exceptional cultures and musicians meet. Tarek Abdallah 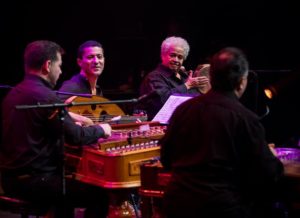 Exciting meetings, special collaborations, music crossing borders and local treasures in Budapest – this was Budapest Ritmo, inspired by the success of WOMEX15 and organized by Hangvető and CAFe Budapest 2016.

Having a cimbalom was quite common  in wealthier Hungarian bourgeois families in the last century.  The lady of the house frequently played cimbalom with the  instrument  finding its place beside  or instead of the piano. In spite of the long-standing popularity of the instrument  it is quite rare to be able  to listen to cimbalom duets.  Although Kálmán Balogh and Miklós Lukács fairly regularly perform in duos  independently, they started  playing together only recently on the initiative  of the label. The album for  the most part contains the compositions  of Miklós and transcriptions which are based  on folk music  sources  suggested by Kálmán. The two musicians  built this production on the foundations of the playing style of the ’stongholds’ of Hungarian and Romanian cimbalom playing (the Szatmár and Székelyföld regions) and the  interpretations of famous cimbalomplayers  such as  Pál Tendl from Sopron. 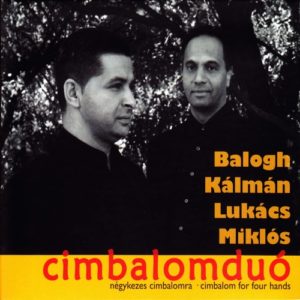 It  takes  two to bring out the wonderful subtlety and expressive power of the cimbalom.
Thus Kálmán Balogh and Miklós Lukács joined forces in 2009, to acquaint audiences  with their art and the potential in this emblematic instrument. The result is novel and poignant: jazz meets folk under the flag of musical proficiency.  At the initiative of  the publisher the two virtuosos  started experimenting in 2009, and the sessions soon turned into playful explorations accompanied by joking and ever new ways of beating the strings.
The fascinating skill and confident versatility enthral listeners: as Balogh relaxes and Lukács leads, audiences marvel.
2015 is yet another  milestone in the life of the Duo. Their recently released album does not spare surprises. It is immediately clear that it was assembled with great enthusiasm, deriving inspiration mostly from folk music. The play of the duo moves on a vast scale from pianissimo to  fortissimo, loose tacts to strict dance rhythms, rigorously defined themes to free improvisations, always full of passion and spirit.