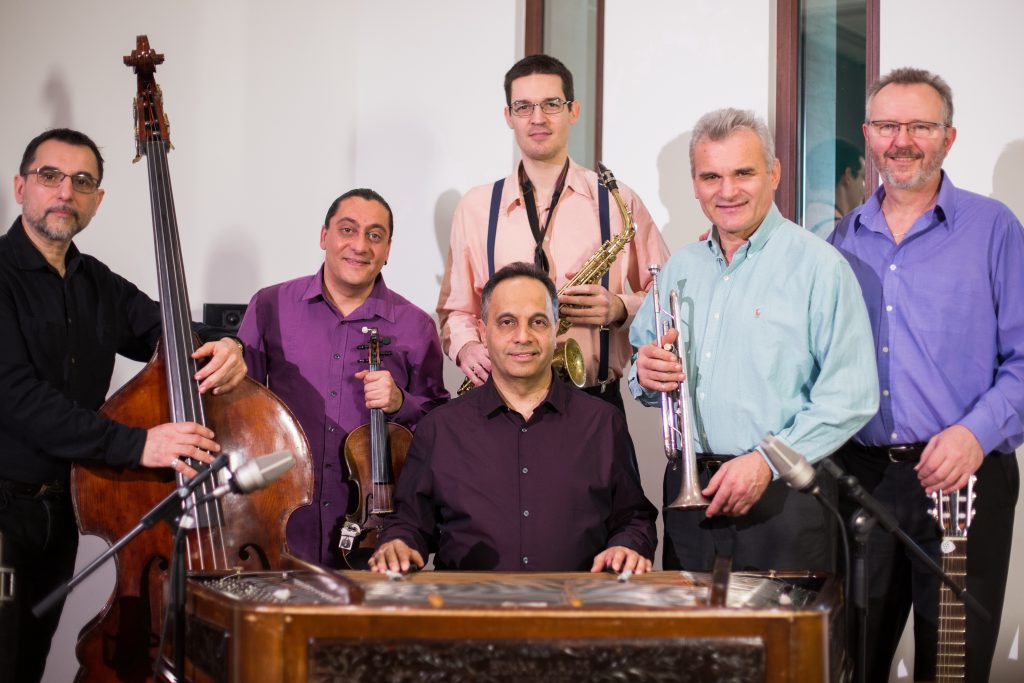 The music of Gipsy Cimbalom Band is a ‘great meeting’ of different musical genres. The ensemble search for those association points, through which it is possible to interpret what might seem from many other points of view diverse music. Due to the high level of their technical ability with their instruments their imaginative ideas are effortlessly realised on these selections. The compositions are not mere reconstructions of pieces from each source area since the music, like Gypsies, crosses boundaries and the band manages to find unexpected combinations and juxtapositions. These traditional tunes merge seamlessly in the hands of the accomplished musicians as they swerve from style to style, constantly improvising around the main theme. This music is no longer ‘traditional’ but universal. 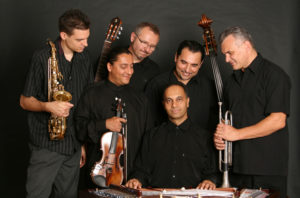 This band is guaranteed to put a spring in the step, bring a smile to the face and refresh the appetite of even the most jaded musical palette.  Humour and irony, often self-referential, are evidently theirs, without which their music surely could not be genuine. Besides, virtuosity, a firm grounding in classical music studies, love of jazz and knowledge of and respect for different peoples’ music are common denominators for the musicians of Gipsy Cimbalom Band. These elements are combined to provide a special musical experience for the listener.” 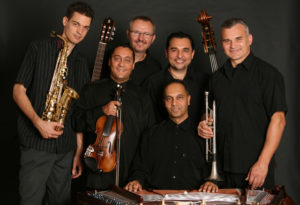 “I like him very much. I have gone to see him everytime he’s been here.”

I heard and saw you gentleman in New York on March 26th, 2014 at the JCC. Great performance.!!  My friend and I quietly went to the back of the room and danced to your terrific music. We could not sit still – it was so energizing.!! I bought your CD and play it in my car all the time. Thank you  Kalman and band for your musical gifts to the world!!.” 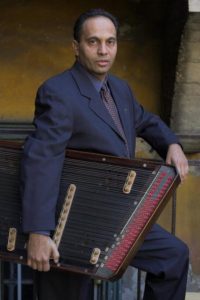 Kálmán Balogh Cimbalom
Kálmán Balogh is one of the best known and most recorded cimbalom virtuosi. His uncle, Elemér Balogh was a world renown cimbalom player and he was the first person who taught him the art of the cimbalom. Kálmán completed his formal music education at the Franz Liszt Academy of Music in Budapest. He was featured performer with Andre Heller’s Gypsy Show Magneten and was the musical director and arranger of the Gypsy Spirit Show, which toured North America to critical acclaim from Coast to Coast. He is a unique musician and he is at home in several musical genres: classical, folk, world, klezmer and jazz. Balogh performed in the USA and Canada with several popular bands on many occassions, his own Kálmán Balogh Gypsy Cimbalom Band, the Ökrös Band, Muzsikás band with Márta Sebestyén. He played as a soloist with the Budapest Festival Orchestra, the Philadelphia Orchestra, the Oregon Symphony etc. He has over 100 recordings with different bands from around the world, and is probably the most sought-out cimbalom player in the world as a guest and recording artist. The Boston Globe called his playing „demonic” and The New York Times reviewed him as „dazzling”. 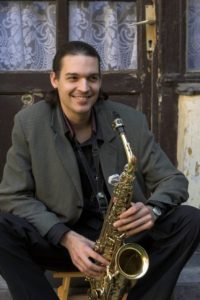 Péter Bede Saxophone
Péter Bede is a graduate of the Budapest Franz Liszt Akademy of Music Jazz division. However his road to arrive to world music is a long and exciting one. He first studied folk music extensively, later began to play saxophone and clarinet. He regularly takes field trips to the Eastern Transylvania, to the Csángó Hungarians. This group of people preserved ancient folk music which is unique in Central Europe. Péter plays and studies with the last surviving authentic folk musicians from this remote region of the world. Interesting to note that improvisation is key in folk music as well as jazz. Péter is an excellent and a universal performer. 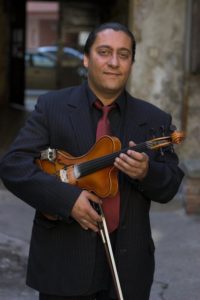 Frankie Látó Violin
At the age of five he started his studied in violin playing at Ferenc Liszt Music School in Szeged. While a student of classical violin playing he was exposed also to playing folk music from the Balkans and Hungary. He moved to Paris during his late teenage years and received a degree at the Boulougne International Conservatory of Music. In France he was exposed to contemporary jazz and became a student of Didier Lockwood who was a student of the legendary Stephane Grapelli. He appears on numerous jazz records , plays the „old school” swing and contemporary jazz on the violin. 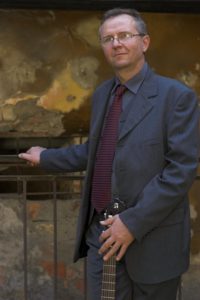 Mihály György Guitar
He has been studying folk music since he was 6 years old. Altough he is a graduate of the Franz Liszt Akademy of Music Jazz division. He continues to play folk, jazz and ethno-jazz concurrently. Mihály plays folk instruments and guitar for ethno jazz groups such as ‘Quartet B’ lead by Mihály Borbély.  He played in the greek folk band Sirtos and in the Kolo folk band where he plays  Macedon music. His admiration to ethno-jazz genre comes from his love for improvisation. 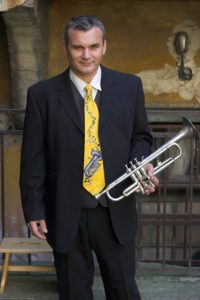 Ferenc Kovács Trumpet and Violin
Kovács is a sought out jazz trumpet player, violinist and a composer. He studied at the Budapester Franz Liszt Akademy of music and has toured the world extensively as performing artist. Ferenc is the leader and composer of the Magony Ensemble, was a founding member of the Budapest Ragtime Band. He is a much respected musician in Hungary who is well know for his exceptional skill to improvise in jazz, folk and world music. 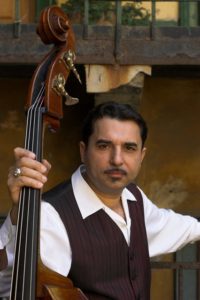 Csaba Novák Bass
Csaba Novák is one for the finest Roma musicians in Hungary and has wide experience in all styles of bass playing. He recieved his musical eduction at the famous Rajkó Gypsy Youth Orchestra wich trained him in traditional Gypsy music as well as in classical genre. He was a member of some of the most famous „Gypsy” bands and is also heard on dozens of recordings. In 1996  Csaba started to play in the Gypsy Cimbalom Band and in the Joel Rubin Jewish Ensemble to.

The music is in their blood! As in many  parts of the world, Roma musicians are peerless in musical entertainment in Hungary as well. The foundations of the music of Kálmán Balogh and his fellow performers in the Gipsy Cimbalom Band are their outstanding instrumental knowledge and virtuosity so characteristic of famous musician dynasties on one hand, together with their familiarity with different musical  genres and styles. The members of this exclusively acoustic band are all dynamic and versatile musicians with equally eclectic musical taste, capable of changing musical direction at the drop of a hat. For this album Kálmán Balogh also scores a bull’s eye with his decision to invite contributions from some of his favourite vocalists.
Having his ’own’ band provides  Kálmán Balogh with an opportunity to give voice to his personal musical vision  in the company musicians and composers of similar stature. The band leader and cimbalom artist often plays together with the best Hungarian folk musicians and also makes regular excursions into classical, jazz, and rock music, both at home and abroad. This is reflected in the line up of the present band, in which Roma and non-Roma musicians alike play their part. There are as many different perspectives from various musical  paths as there are band members, but the revitalised Gipsy Cimbalom Band is a novel and exciting venture for all of them. The cimbalom, featured in the name of the band, is probably an instrument of Persian origin, although its different varieties have a long  tradition in many other cultures as well. The instrument most often associated  with the name cimbalom today was developed in Hungary in the second half of the 19th century, thanks to the innovations of József Schunda. The other  instruments used by the band,  violin, saxophone, trumpet, guitar, double bass and drums are more  widely know than the cimbalom, but their especial use in this unusual line up results  in an unconventional though distinctive sound, full of surprises.
Just as Roma culture transcends national bounderies, so the Gipsy Cimbalom Band verge from style to style finding unexpected combinations and juxtapositions. In this respect, the music here is not only ’traditional’ but rather universal. The starting point fot these musicians is primarily the instrumental dance music performed by Roma in the Carpathian Basin and the Balkans, but in contrast to much traditional music greater emphasis is placed on improvisation and their compositions are flavoured with elements of jazz and swing and  characterised by their invidiualistic instrumentation. This is what makes their sound so fresh and contemporary.  In the hands of these excellent musicians the colourful variety of tunes and genres are easily and comfortably combined and playfully arranged into a stylistic harmony. It is this ability that is possessed by only the very best artists. 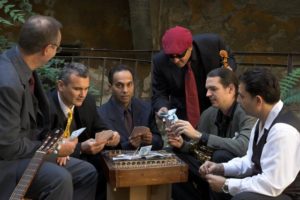 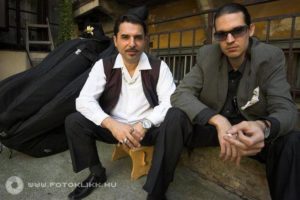 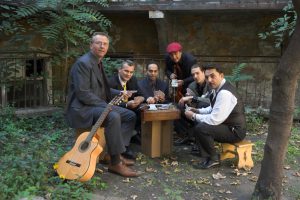